Light up the Beat! at Singapore Night Festival 2017 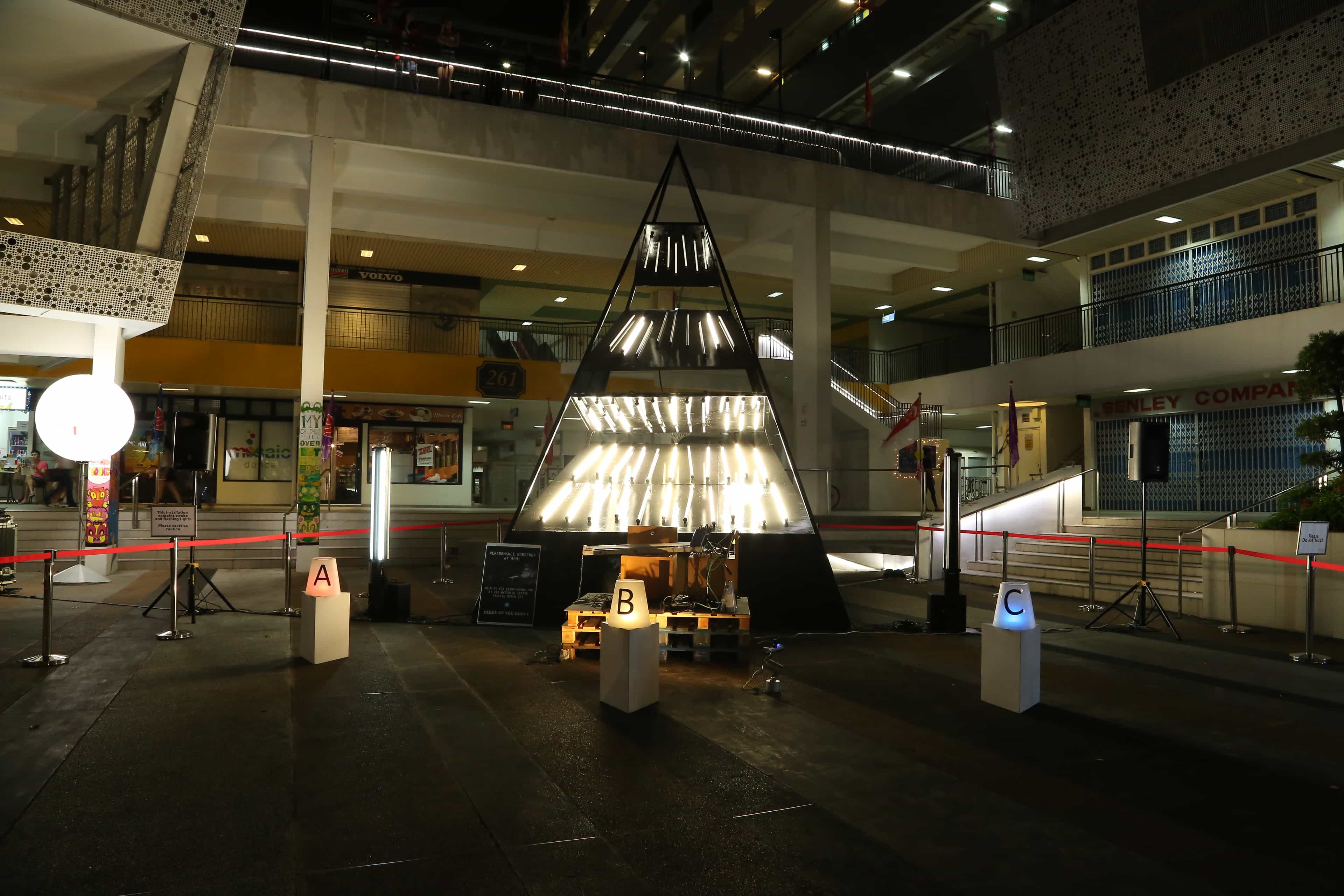 Town Musicians of Fluorescent
We wanted to emphasize the heritage and old history of the Waterloo site in contrast to the modern buildings of the area. The era of fluorescent tubes coming to an end and being replaced by LEDs seemed like a fitting mirror as a representative of the old and familiar. 41 old fluorescent tubes were acquired from the Singapore Management University (SMU) site nearby which was undergoing replacements of these lamps to LED fittings, and spun the story according to the famous tale of Town Musicians of Bremen. These retired fluorescent tubes were given a second life with our installation as musicians, flashing and dancing in the night. 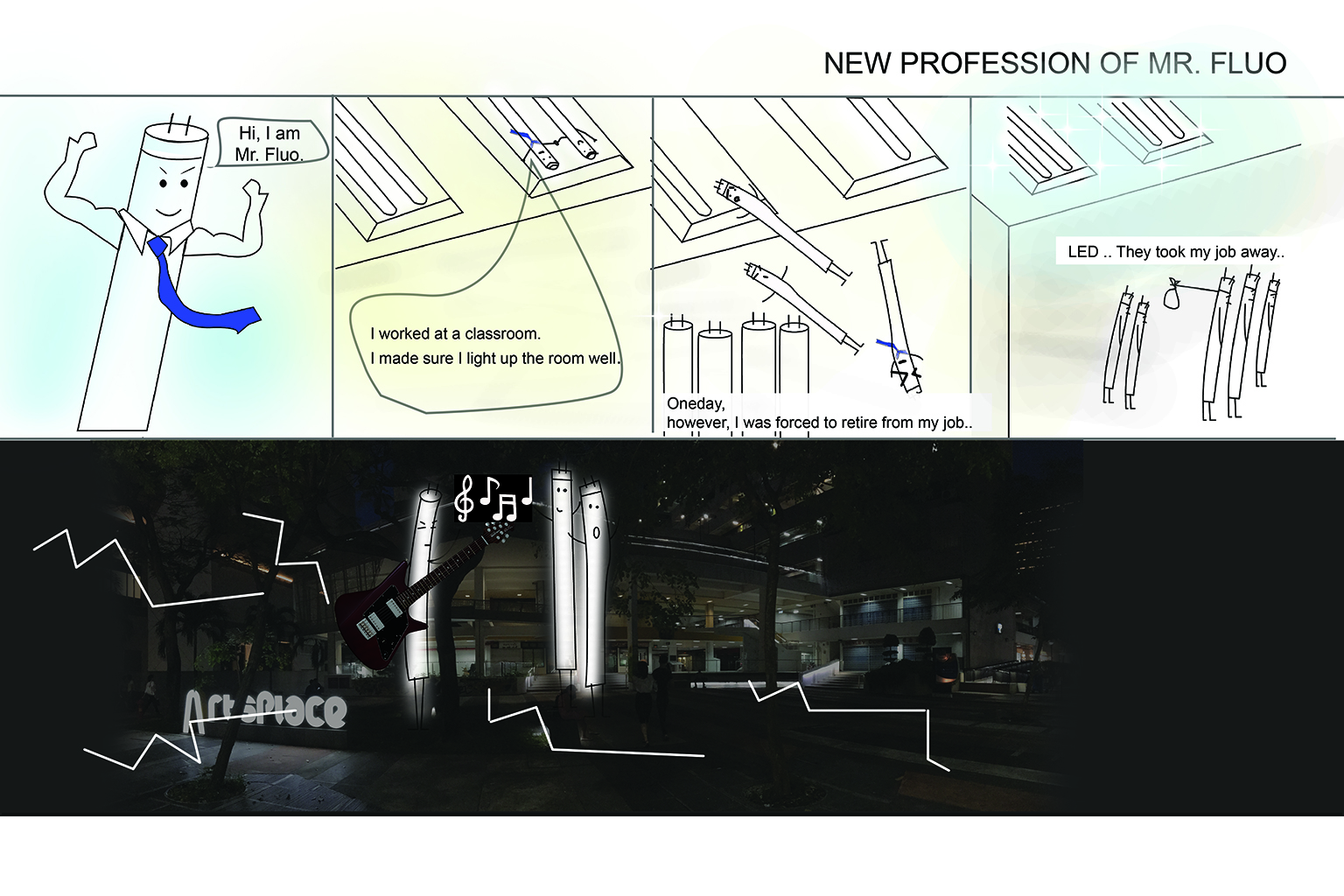 Design Dilemma
With the background and story in mind, conceptualizing the structure aesthetic was not easy due to the scale it had to be to house 1.2m of fluorescent tubes and to be of a substantial size complementing the site. Using 4 tiers to represent each animal in the Brothers' Grimm fairytale, we started off with an ambitious 200 fluorescent tubes as the first draft. However, a 6m structure meant that we would have to meet local PE endorsement and the weight for 200 tubes physically and electrically were not feasible and a fire hazard in case of heavy rain. Situated in a quiet residential neighbourhood with an aging population, brightness and decibels were a pressing concern as well.
Finally settling on 60 tubes, playfully arranged, with Ito-san's music arrangements after endless brainstorming, design revisions and two nerveracking mock-ups, we looked forward in anticipation of the construction day. 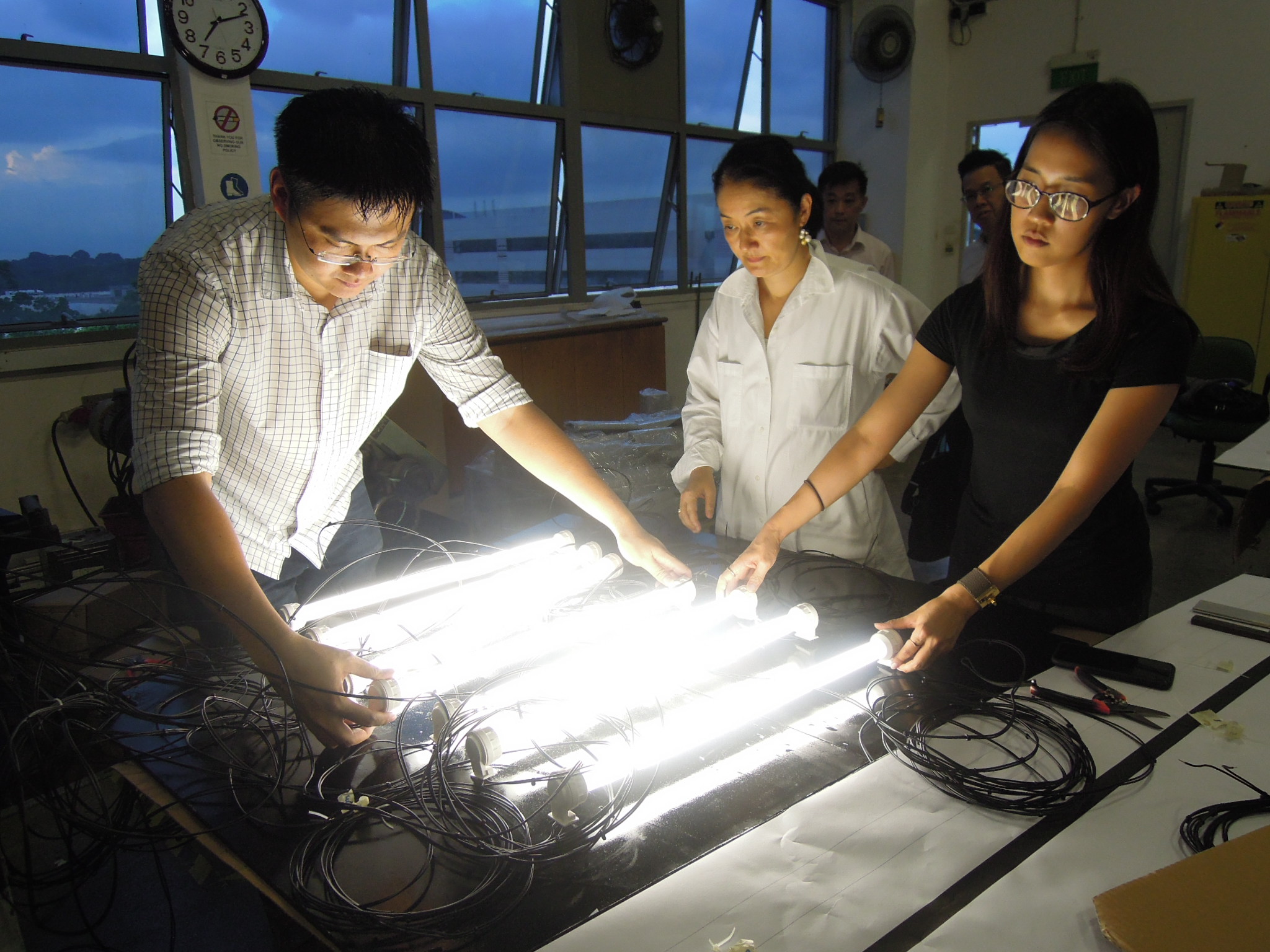 Structure Construction
Due to the sheer size and scale, construction of the structure had to be done onsite and welding progress of the skeleton was also highly dependent on the hopes of good weather as it was an outdoor site. It was a worrisome few hours as LPA's first time supervising construction and overseeing safety on site for such a big structure. In total, it took 5 days inclusive of finetuning for the installation to be up and running. 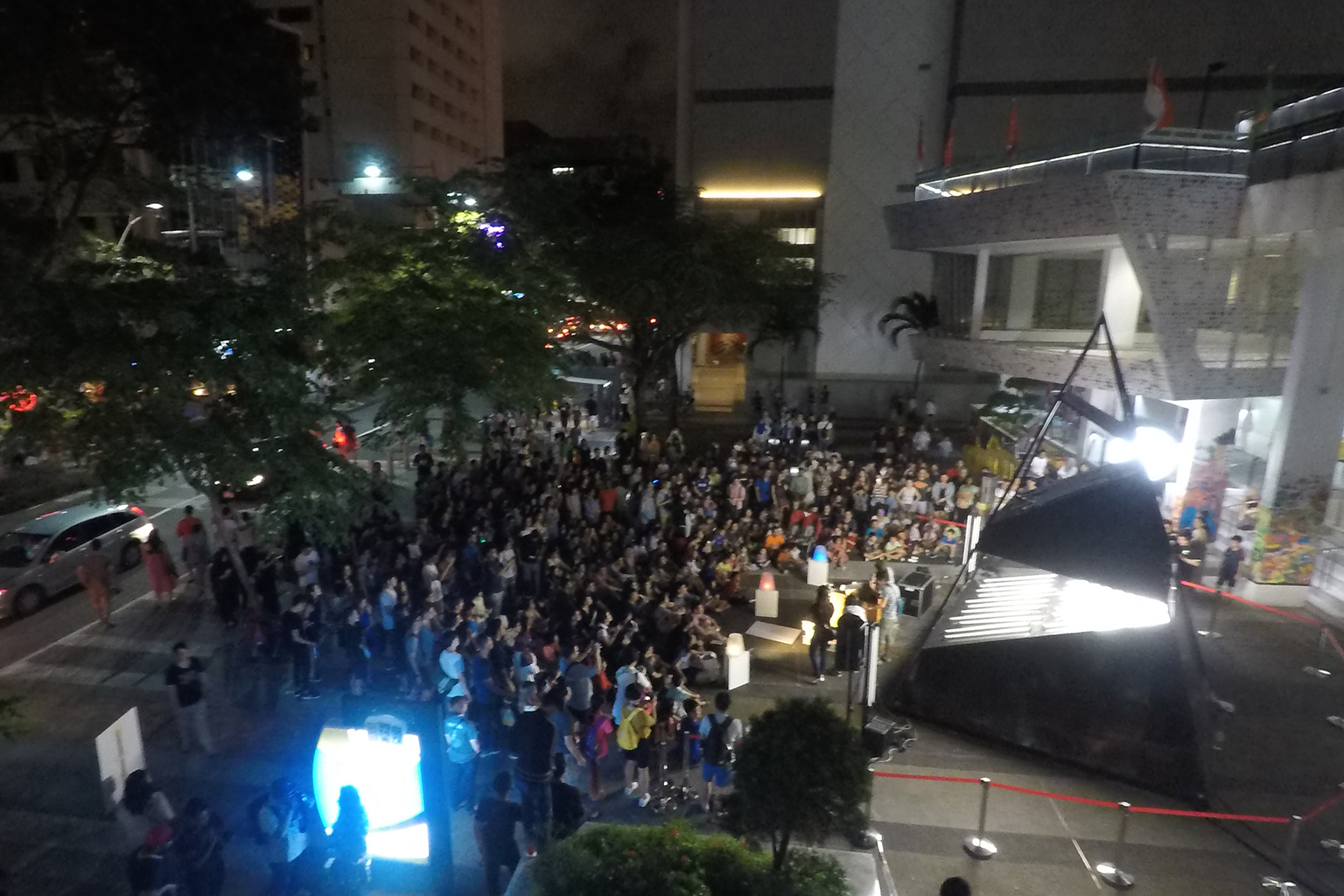 Media Preview and Opening Weekend
After a week of setting up and fine tuning, we were ready for the Media Preview on the 16th evening and opening night on the 18th! There were 5 groups of media representatives, ranging from influencers, digital media and mainstream media representatives to cover and learn more about our installation. Overall, people were surprised that the sound coming from the installations were frequency amplifications of the fluorescent tube ballasts! Opening weekend went smoothly aside from a small hiccup when a fight broke out near the installation and ended up damaging the cables slightly. What a dramatic close to the first opening weekend with police and ambulance on site before the installation operation time! 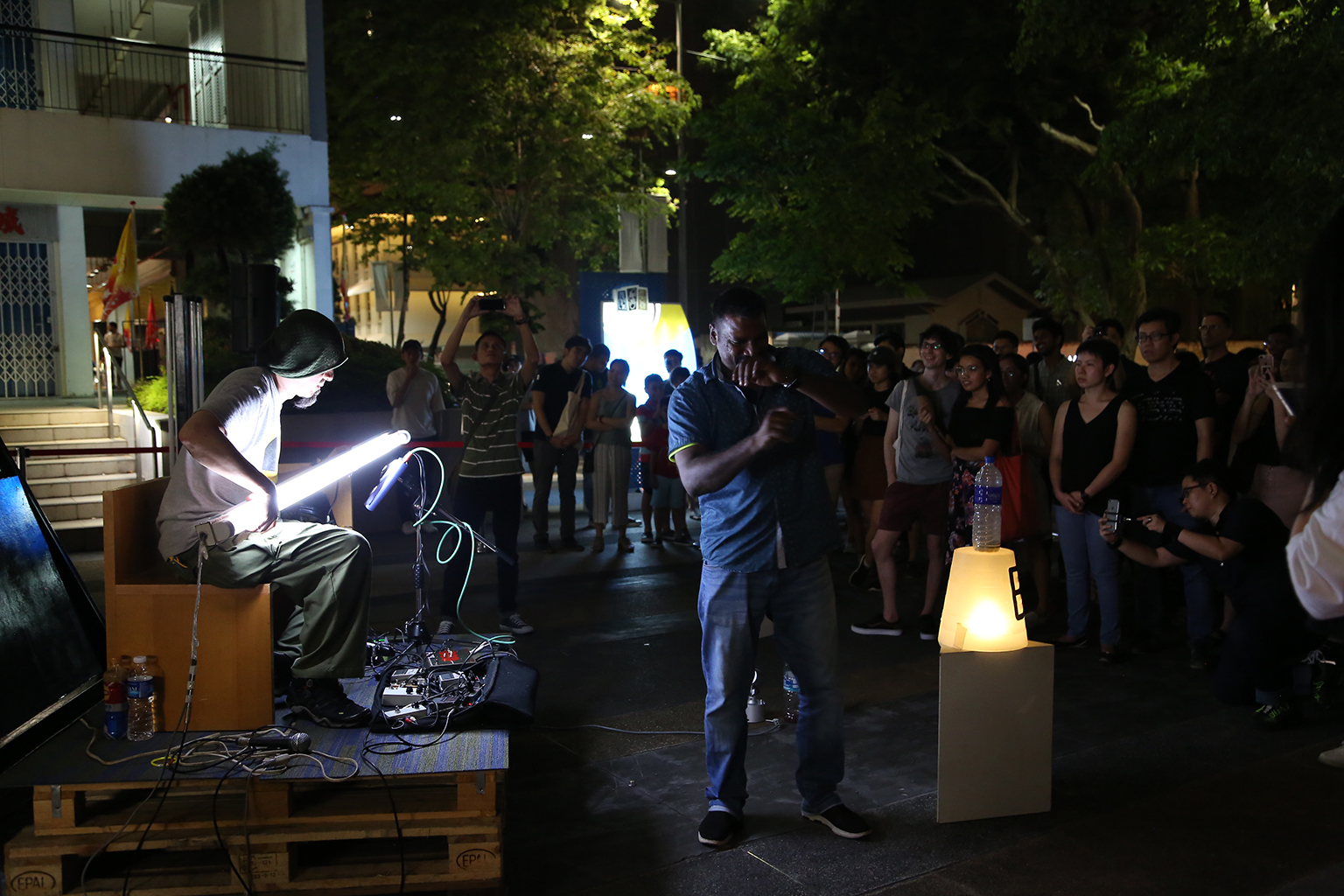 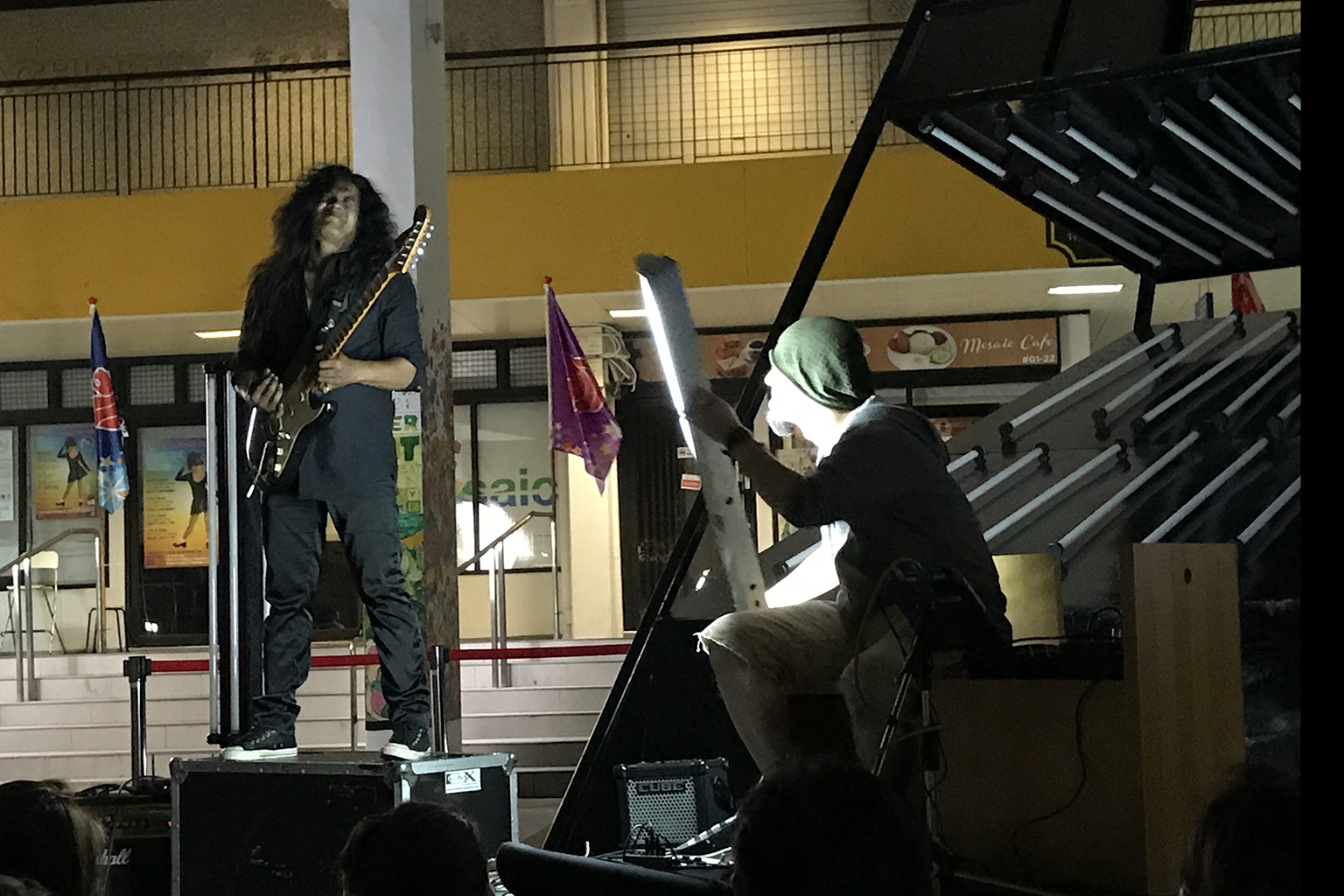 Lighting up the Beat!
Performance weekend was a blast! LPA Singapore office started out in the early evening informing passers-by of our workshop and creating excitement with the sound-test and the crowd was enthusiastic and most of the metal tools and accompaniment instruments were given out within the first 5 minutes of gathering the crowd. The artist led a 20 minute warm-up and practice with the audience, followed by his accompaniment with the crowd. Most participants were walk-bys and their numbers greatly exceeded the 45 people we planned for, creating a vibrant and happening atmosphere to the pulse of the fluorescent giant in the backdrop. Families, friends, children and the elderly were all involved and happily clapping along. The first night featured a man who was entertaining the crowd with his moves during the artist solo. And the second night had an impromptu guest guitarist Raven who jammed and wowed the crowd with Ito-san's industrial beats.

It’s built!
It is finally up. Everyone was very happy with the result. Coloured papers, gels and silhouette shapes covered the tubes which became an impression of stained glass windows. Every artwork was unique. RGB linear light and LED bulbs accentuate the coloured tubes. Participants and staffs had a wonderful experience building it up together. It gave us a sense of pride as more people gathered around the cube to take pictures. To topped it all off, we had a group photo in front of the cube which ended our day. Hooray!

Thank you!
To all parties that helped made this workshop a possibility. As well as, many thanks to participants whom enjoyed their day with us. 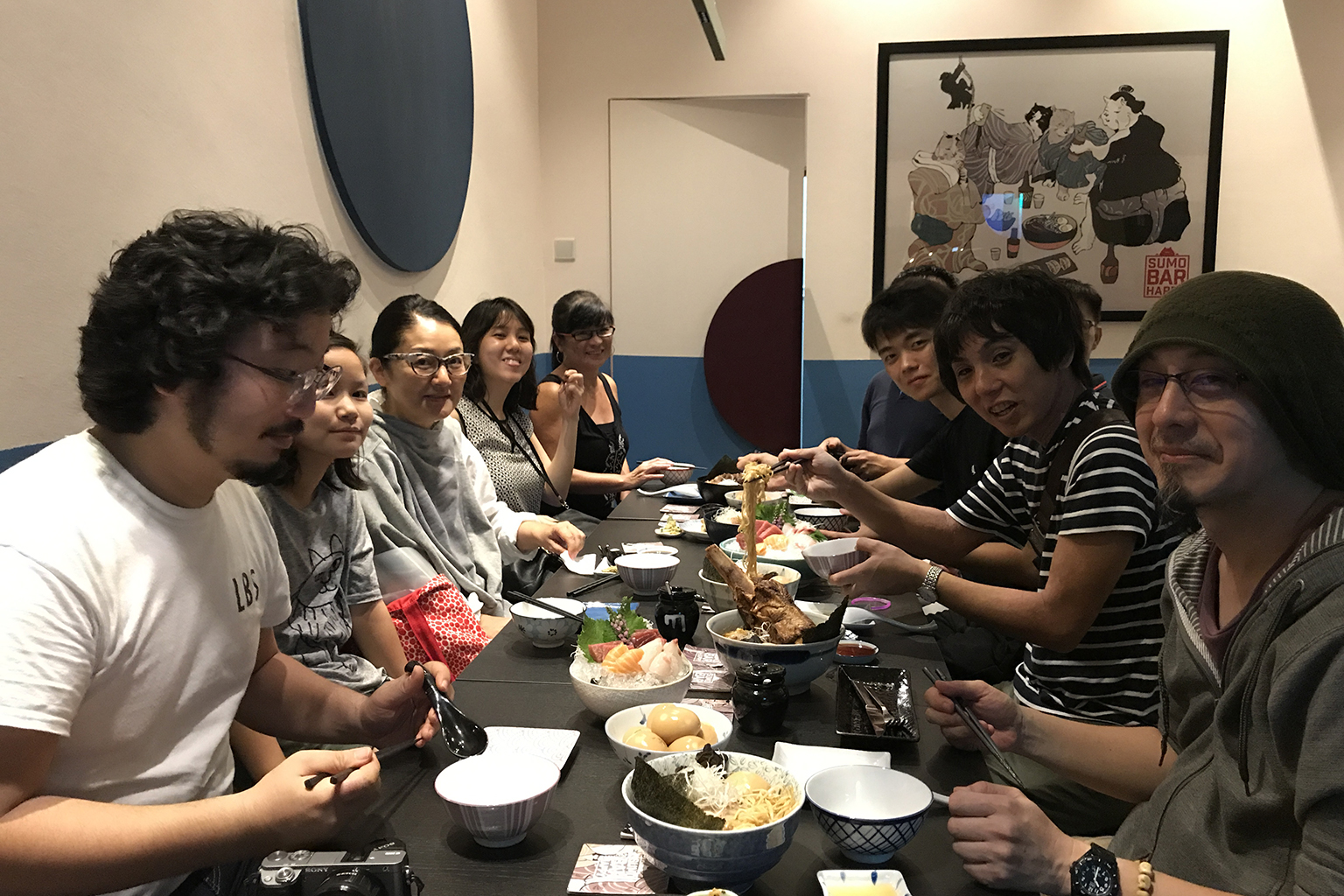