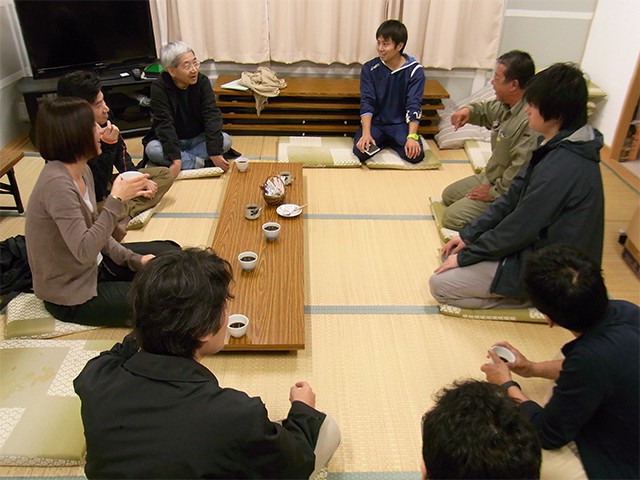 After the great earthquake and tsunami hit eastern Japan on March 11, 2011, as a group of lighting professionals, we wondered what kind of support we could offer the affected areas.  This led us to start of The Earthquake Disaster Relief and Support Project.

After the disaster hit, in many areas lights-out + energy-saving campaigns went into effect creating darkened cities.  We surveyed this situation in the first part of the project, “The Setsuden Lighting Environment Survey.”  The second part included an internal, office-wide competition, “Lighting Design in Times of Disaster.” In the next stage of the project, our objective was to be directly helpful to the affected areas by implementing lighting workshops and the Akari Café.

All of these activities are 100% non-profit, voluntary based, and supported by volunteer groups which enables us to continue with this project each year.  Our quest is that these activities not only help with disaster recovery in affected areas now but also provide insight into how lighting design can be helpful when a new disaster hits.

It has been 5 years since the start of the disaster relief project and last year marked a new turn in our project activities.   We underwent a hearing survey concerning the lighting environment and other lighting issues around the time of the earthquake of those individuals affected in the disaster-stricken area of Kesennuma, Miyagi.  Learning and knowing about the lighting conditions during times of disaster is one way to attain hints in preparing for the next disaster, physically and mentally.  When the results of our study are accumulated we plan to make the knowledge public.

With the help of local residents, the Akari Café reopened in the Koizumi area of Kesennuma. (The first visit was in July 2012.)  The Akari Café is just one small part of the community revival process and an opportunity to witness the beginnings of a community-wheeled project.
In 2015 the first akari event was held in conjunction with Kesennuma-Yokocho, an area of temporary food stall vendors set up to re-establish local economic activity, and in 2016 we went back for a final Christmas event. The children made ornaments to decorate the previously constructed Yokocho lantern tower and in the plaza nightscapes from all over the world were projected onto a screen. 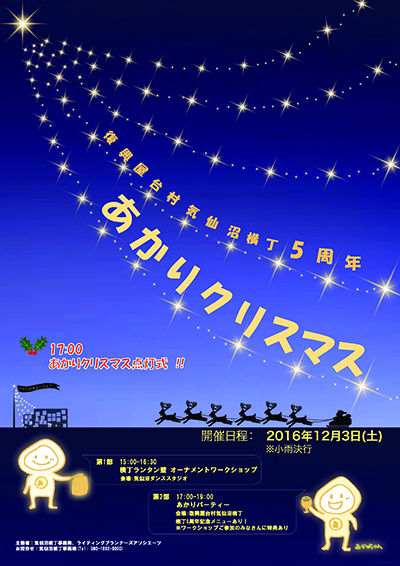 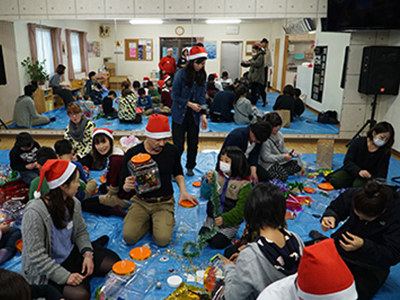 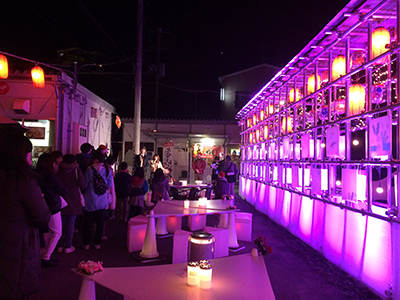 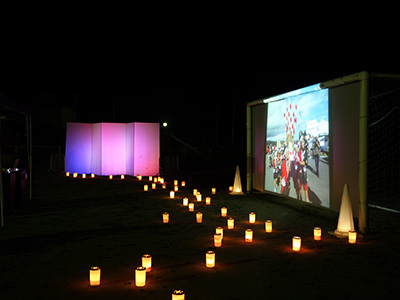 Through connections from a member of APCAS, a local NPO group working in the Motoyoshi-cho area of Kesennuma in 2012, LPA teamed-up with Kesennuma Yokocho, an area of temporary food stall vendors setup to re-establish local economic activity.  Because of regrading construction, the food stalls will be closing in October 2016.  Now in the fourth year of this project, the Akari Café was expanded into an Akari Party to rally the area for their last year of business.  For this winter event, the Akari Café kit was updated and outfitted with a specially-designed luminous kotatsu, a Japanese-style table with a built in heater which radiates warmth and in this case, light.  Also, at the workshop, children created colorful lantern covers to be used along with the permanent lighting and a drawing board for children was set up.  The design theme was an Ocean Christmas and more than 40 children attended the festive workshop, more than any past events!  In spite of rain on the day of the event, the children`s lanterns decorated Yokocho throughout the last year of business at the food stalls.

Now in the third year of this project, we reused the mobile Akari Café kit, designed and put together the year before, at two events in Ishinomaki, Miyagi Pref.  The first event was held in August for residents living in the temporary housing blocks.  At the local community center, we held a simple lecture on lighting and then crafted lanterns that could also be used in the temporary housing.  The Akari Café was then transformed into a place to talk more freely with the residents and for them to experience different types of light.  This 4-part event was even attended by some of the elderly residents.

In September, we held a children’s lantern making workshop in conjunction with the Akari Cinema, an alfresco movie event by Okada Theatre at the Ishinomori Comic Book Center.  The lanterns were made from the same plastic material as the Akari Café chairs and were lined up to make a track of light.

2013 marked the second year of our involvement in the recovery effort of the Eastern Japan Earthquake of 2011.  The 2013 project, Akari Cinema, was centered in Ishinomaki, Miyagi Prefecture near Sendai, on the site of a local cultural icon, Okada Theatre, and in the surrounding park, both badly damaged in the disaster.  In continued cooperation with APCAS, a local NPO, and Prof. Sakada`s Design Studio of Kyoto Institute of Technology, LPA created a lighting installation to commemorate the damaged theatre and other lighting items to facilitate a fun environment for the outdoor cinema, all based on previously design Akari Café lighting items.  Even though it was a cool night, about 150 people were in attendance and the event was also covered in the local newspaper.

housing to regaining quality of life.  Challenges included reestablishing a local community and trying to make life in the temporary housing as comfortable and fun as possible for what could continue as a prolonged situation.  Most of the programs set up to reestablish community in the affected areas were held during the day, which proved difficult to create new interaction.  We wanted to create a program that would access different age groups and social circles unlike before and be that something to generate activity inside and outside the community.  In 2012 we stated the “Akari Café”.

The Akari Café is a mobile café program with luminous items
Akari Cafétravels to temporary housing communities or local community centers.  All of the lanterns, chairs and tables used by the Akari Café are included in this portable kit.  During the day a children`s lighting workshop is set up for local children and at night the Akari Café is a gathering place.   This 2-part program is open for everyone and aims to promote interaction from inside and outside the local community.  At dusk, children parade around the café with the luminous items create at the workshop, shadow play, or just run about, while the adults relax under soft light of the café and enjoy summer nights.