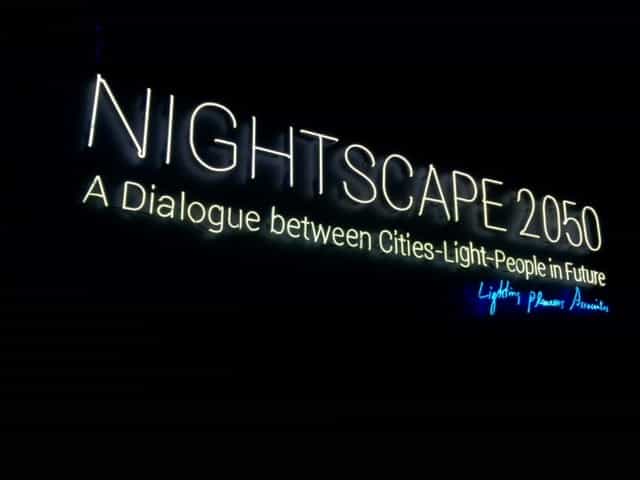 This exhibition aims to explore the interactions between people, light, and cities in the year 2050.
“Nightscape” does not just mean the evening view; to us “nightscape = humans and cities at night.”
The emergence of new light sources such as LEDs, OLEDs, and lasers as well as the evolution of lighting-control technology in the 21st century may dramatically change our living environment. At the same time, numerous natural disasters, manmade disasters, and environmental changes have forced a discussion on how to approach energy consumption including how to power lighting.
There have been both optimistic and pessimistic views on the interactions between humans and the use of light.
Endlessly evolving optical technologies have provided us not only the convenience but also the pleasure of freely manipulating light and shadow. On the other hand, the use of artificial light has greatly impacted the circadian rhythm of humans and animals, and we now face the problem of light pollution nearly everywhere.

How can lighting design contribute to the creation of “wonderful light enjoyed by all people”?
What can we expect our lighting environment in 2050 to be?

LPA hopes the exhibition will encourage an engaging dialogue to exchange ideas on the delightful future of light and people throughout the world.

The Meaning of a Travelling Exhibition

This travelling exhibition travelled to four cities around the world. In addition to holding the exhibition in the three Asian cities where Lighting Planners Associates have offices - Tokyo, Singapore and Hong Kong, Berlin was also selected as an exhibition site, as it is one of the most culturally refreshing cities outside of Asia.

The exhibition in Berlin was held for two months from August to October 2015. It attracted substantial media attention and was widely talked about. The educational part of the exhibition including, a children’s workshop, received wonderful feedback and the exhibit even attracted visitors such as school teachers with young students.

In October 2015, the exhibition moved on to Singapore and was held for a month. The exhibit coincided with the nation’s 50th anniversary and this turning point provided us the great opportunity to question the future of urban lighting. Particularly, the chronological chart, depicting how urban lighting in Singapore has evolved since the building of this nation, received rave reviews. Visitors also enjoyed the atmosphere created with special lighting in the atrium at night.

The one-month long Hong Kong exhibition, held in January 2016, attracted as many as 19,000 visitors. The Hong Kong exhibition was held in the largest gallery space among the four exhibits and received a large number of family visitors who enjoyed the light experiential booth specially created for the Hong Kong gallery. The analysis of “What is Hong Kong Light?” also enticed visitors.

The exhibition reached its final stop in Tokyo and was held from May to June 2016. Preparing for the final leg of this journey, we took the opportunity to reflect on the meaning and outcome of a globally travelled exhibition. How does light and lighting interact or exist with people and the city itself and how is it supposed to evolve from here? It seems too early to answer these questions, however, the exhibition platform opened up opportunities for dialogue about the future of light. This dialogue has gained acceptance in the cities where the exhibition was held. By engaging in discussions from different points of view, we discovered that lighting technology is developing on a global scale, whereas lighting culture is developing with very strong local components. These four cities, all under different circumstances, are developing distinctive cultures of their own with hopes for their own unique future.

The four exhibitions attracted many visitors and received much media feedback in the form of newspapers, magazines, TV, radio, ect. In response to the children's workshops coinciding with the exhibitions, visitors included not only lighting professionals, but families with children. We sensed that lighting design is little by little penetrating into the general public. The anticipation of a “chance encounter between light and people” and to be in contact with the reviews and comments from many visitors was very exciting for us.

7 Travelling Contents
This exhibition consists of seven components, listed below:

1. Learning from Nature
The fundamental principle of LPA’s lighting design is rooted in Nature. All our design efforts are to get closer to skillful light and shadow created by the two natural light sources, the sun and fire.

2. Learning from World Nightscapes
LPA has accumulated a massive collection of nightscape pictures through countless lighting surveys around the world.

4 .Learning from Masters
Interviews of 5 experts in design/art and technology about their visions for lighting in the future will be presented. Their ideas are thought provoking.

5. Learning from Children
Children workshops were conducted to learn who their heroes and villains of light are, by taking walks in the evening and observing the nightscape. What can adults learn from them?

6. Who is LPA?
A section of the exhibition also shows a chronological chart of architectural lighting design and the projects of LPA as well as their latest monograph, “LPA 1990–2015 Tide of Architectural Lighting Design.”

7. Workshops and Symposiums
We will conduct workshops and symposiums that are contextual to the respective cities. We hope to encourage stimulating discussions in each of the four locations the exhibition will appear.